Agenda of the conference in Armenian and English

Capacity building workshop on external quality assurance mechanisms and tools for TNE was organized in Paris 21-22 September at the project partner institution UNESCO/IIEP.

Workshop topics concerning TNE quality assurance procedures and tools, particularly the quality assurance at the programme, faculty level paying a practical attention to the indicators to be used. During the workshop project European partners presented relevant good practices on the topics discussed.

In the framework of the TNE_QA project National Dissemination Conference took place from 11-12 July, 2017. This was an opportunity to share the project outcomes with wider public from Georgian Universities that are not project partners. The participants from project partner institutions presented the achievements and challenges by their respective institutions, as well as discussed the finalization of the project.

Among the topics discussed were:

Agenda of the meeting
Pictures of the event

The “TNE Pilot Accreditation Workshop” in the framework of the “Promoting Quality and Recognition of Transnational Education in Armenia and Georgia” (TNE_QA) project touched upon a wide range of topics, including TNE_QA national level policies in the Armenian and Georgian contexts, presented by National Quality assurance agencies (ANQA and NCEQE), Ms Susanna Karakhanyan presented a possibility for development of a template/model for the presentation of the national level guidelines on TNE to the Ministries of Education in Armenia and Georgia. At the same time the international and national experts discussed the challenges they had noticed during the site visits in national universities and brought up a discussion on means of eliminating those.

Agenda of the meeting

Tempus TNE_QA “Promoting quality and recognition of transnational education in Armenia and Georgia” project 1-st workshop on “Internal QA mechanisms and tools for TNE” took place in Batumi within 23-24 June, 2015. During the Workshop the perspective of Armenian and Georgian Quality Assurance agencies (ANQA and NCEQE) on policy for the Quality Assurance on TNE was first discussed in line with the UNESCO/OECD Guidelines.

The Workshop participants worked within groups on criteria and standards primarily prepared by the WP-2 leading Institution-EFMD (European Foundation for Management Development).

After the discussion of the criteria during the plenary session the suggested indicators were discussed in the workgroup sessions and improved according to the suggestions and formulations given by all the participants.

During the Workshop further activities regarding the standards and criteria elaboration on TNE Quality Assurance were planed for the next Workshop to be held in Paris in 2015.

A final list of indicators, based on the data collected though the online questionnaire and the input of the workgroup will be circulated prior the workshop in Paris, for final validation and adoption. In the meantime the National Agencies will prepare a document summarizing the national regulations and constraints to be incorporated in the final QA model.

Wrap-up of the worksgroups , suggested indicators

The 1st EACEA (Education, Audiovisual & Culture Executive Agency Tempus Programme ) NEO (National Erasmus+ office) Monitoring and Armenian Local Working Group Meeting took place on the 12th of December at French University in Armenia. We were honored to host Mr. Klaus Haupt, Head of Unit, (Education, Audiovisual & Culture Executive Agency Tempus Programme) accompanied by Ms. Lana Karlova, Coordinator of National Erasmus+ office at French University in Armenia. The monitoring visit started with a welcoming speech of Prof. Jean-Jacques Montois, Rector of the French University of Armenia, where he stressed the importance of the project for the UFAR. A presentation on “TNE_QA Project Activities in Armenia: Progress, Current State, Perspectives” was made by Mr.Arayik Navoyan, TNE_QA project coordinator. A very active discussion and exchange of ideas followed the presentation made by the project coordinator.

As a result of the discussion, useful recommendations were formulated by Mr. Klaus Haupt and Ms. Lana Karlova for the project effective management. As part of the monitoring visit, the team visited one of the partner institutions to better understand the project's implications. Therefore, the afternoon session was held at the American University of Armenia where the team had an opportunity to talk with most of the institution's implementers of the project.

Week for quality assurance of education from December 1-5, 2014 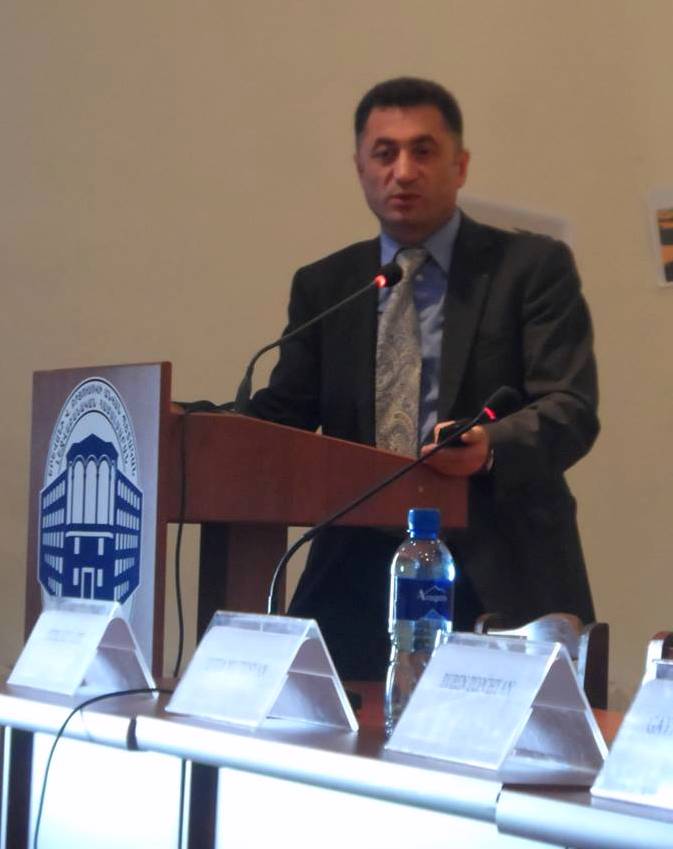 The ANQA ("National Center for Professional Education Quality Assurance” Foundation) held a week for quality assurance of education from December 1-5, 2014. The aim of the given event was to present and discuss the practice of institutional accreditation processes in transition period, general results, the Accreditation committee's decision-making approach, the internationalization and research implementation problems revealed during the accreditation process, as well as the transition to program accreditation process.

Mr. Arayik Navoyan, Vice-Rector of French University in Armenia (UFAR) and the Coordinator of Tempus TNE_QA project on “Promoting quality and recognition of transnational education in Armenia and Georgia”, made a presentation on the “Transnational Higher Education Quality Assurance in Armenia” at Yerevan State Linguistic University after V.Brusov on the 2nd of December.

The Tempus TNE_QA project objectives and activities were discussed within the context of the challenges of TNE provision.

The first annual coordination meeting of the TEMPUS-project “Promoting Quality and Recognition of Transnational Education in Armenia and Georgia” was held in Tbilisi, Georgia on 29th of October 2014. It was organized by the Caucasus University.
The meeting consisted of a project-management-part as well as of a content-related part. During the coordination meeting reports of the activities of WP1, the trainings in Lyon and Gloucester, were given.
This was followed by a synopsis of fact-findings on standards and procedures for QA of TNE. A wide overview of different implementations of QA was presented.
The project-management-part consisted of reports about current issues, communication within the project as well as on future stages of the project and their execution. The agenda of next activities, its methodology and deliverables were decided upon.

On 4-5 June, 2014 in Gloucester, QAA hosted a two day workshop for Armenian and Georgian colleagues from Quality Assurance bodies, ministries and higher education institutions. For Higher Education Institutions the focus was on comparative Quality Assurance processes; roles and responsibilities; structures and management; review and accreditation methods; reviewers roles and training; site visit methodologies and reporting. At the end of the process a plan and template for the development of Quality Assurance units at Higher Education Institutions was elaborated along with a time scale for each Institution. The plans include mobilization and transition plans as well as three year strategic and development plans.

Université Jean Moulin Lyon 3, Lyon, France On 28-29-30 April, 2014 in Lyon, Université Jean Moulin Lyon 3 hosted a three day workshop for Armenian and Georgian colleagues from Quality Assurance bodies, ministries and higher education institutions. This workshop was a part of a three year EU-funded project that will be built on the capacity of relevant institutions in Armenia and Georgia.

For ensuring effectiveness and efficiency of further developments of Transnational Education Quality Assurance systems (internal and external) first capacity building of the Higher Education Institutions Quality Assurance staff, administration, academic staff and students was undertaken. A working group (WG) including EU and local experts was established to develop a training kit for HEIs and EQA agencies. The kit focused on the ways in which quality assurance requirements of home and host country are mapped, compared and understood.

TEMPUS “Promoting Quality and Recognition of Transnational Education in Armenia and Georgia” project launched with a kick - off meeting in the premises of French University in Armenia, Yerevan, February 20-21, 2014.

French University in Armenia, the coordinator of the project, hosted the kick-off meeting in order to discuss Tempus project organization management and evolution methodologies. The main objectives of Kick-off meeting were:

• to introduce all partner institutions,

• to present 7 workpackages within the framework of the project,

• to discuss other financial and technical activities concerning the project.

During this meeting the approaches to management were discussed and launched. The first Project Governing Board meeting was held and main strategic decisions were made. Hence, a methodology of project activities realization and evolution was adopted by PGB.